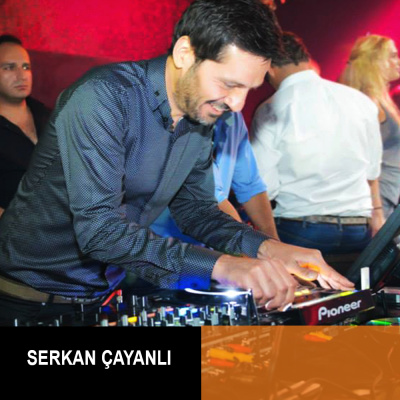 Serkan CAYANLI was born in Istanbul in 1972 and started to take the first steps in his professional career by learning as a DJ with DJ Emre ERDEM until 1994 at the Istanbul Misty Bar and Yalova Aksakal Disco in 1989. In the same years, he has continued to develop his skills and rise in the career ladder by working at Best FM and Tatlıses Radio Production..

Between 1994 and 1998, he worked as the Resident DJ of Istanbul Yess Club and Zing Cafe & Club while working as a business partner in these venues. The years between 1999 and 2009 were the years when CAYANLI raised his professionalism to the level of his mastery. In these years, he has performed in many of the Turkey's and world's Underground dance club as Guest DJ, in the same year, he has continued his DJ life at Çeşme Joy, Antalya MUM and İzmir Club 33, with his unique style and interpretations in House, Tech House and Techno genres. In 2010, he became the Resident DJ of Café de Paris, one of the most popular venues in Istanbul's Lounge and Fine Dining concept. For 10 years, he has succeed to create an environment where visitors can have an pleasant experience by listening his tracks with his own style. In addition to being a DJ, he continues his music production that he has started with Nihat (a.k.a DJ Led) in 2000.

CAYANLI has always wanted to share his experience which he has gained for many years with everyone who wants to be interested in music, he has realized his dream by establishing the moodroom DJ Studio in 2018 and started to teach those who want to improve themselves in this field with Pioneer DJ Academy certified training. Also CAYANLI will start live broadcasts in the first months of 2021 to bring music lovers together with music. He will meet with its audience and followers with performances in the genres of Lounge, House and Club.